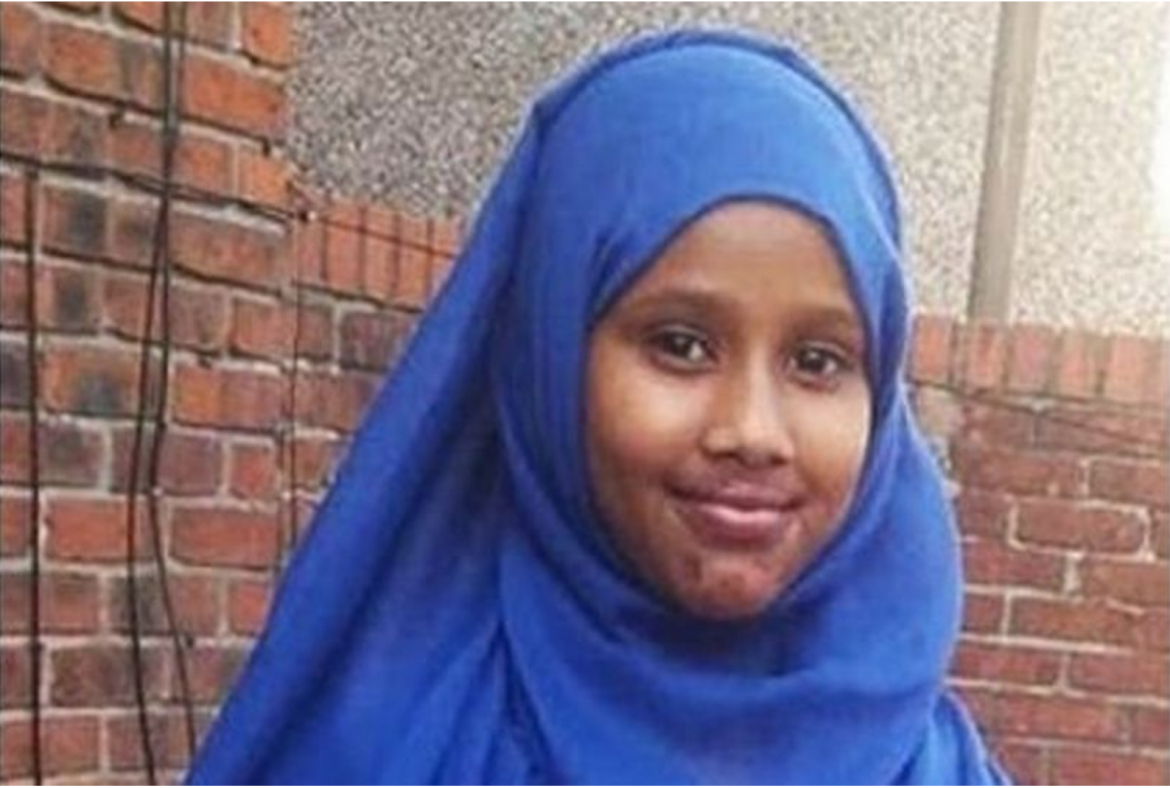 Shukri Yahye – Abdi, aged only 12 was found drowned in River Irwell in Bury, Greater Manchester on 27 June 2019. This tragic case has received substantial media attention, led to protests and online campaigns, with people coming together in thousands to rally. It was said that more than a million people have signed a petition to date, demanding justice for Shukri.

Shukri Abdi came to the UK as a refugee in January 2017 and had high hopes of becoming a doctor. It was alleged by her family that she had been severely bullied at Broad Oak Sports College for a period of over a year and that the school failed to take appropriate action despite being aware of it. The family maintain that she was unlawfully killed.

Mrs Zam Zam Ture, Shukri’s mother, also raised a claim of ‘institutional racism’ within the police force and says that a thorough investigation was not carried out into Shukri’s death. The Independent Office for Police Conduct (IOPC) later investigated these claims.

During the verdict delivered by the Coroner earlier this month, it was concluded that Shukri’s death was accidental, as opposed to unlawful killing and found that the bullying claims were ‘totally incorrect’. It was accepted that Shukri was initially provoked to join the group of children visiting the river and that one of the children (Child 1) had breached the duty of care that it owed to Shukri. However, it was held that Shukri entered into the water willingly and that there was no intention held by the children to kill her. Unlawful killing could not be established.

In IOPC’s final report, it was said that there was no evidence to indicate that Shukri’s family had been treated less favourably, and provided the following points in support:

What happened on the tragic day?

Shukri was at the river with four children (referred to as Child 1, Child 2, Child 3 and Child 4 because they are under the age of 18), who were with her during the period in which she drowned. Although Shukri was unable to swim, she was able to balance herself while holding Child One’s shoulder. When Child One struggled to swim, she let go of Shukri’s arm, at which point Shukri began to see difficulties in the water. Child Three and Child Four contacted the nearby police station when it became clear that Shukri was in severe trouble. Shukri drowned in the water.

We spoke to Advocate, Solicitor and Director, Mr Attiq Malik who is representing Shukri Abdi’s family. He said the following:

The case of Shukri has been a long and arduous journey for the family over a period of just under 18 months in pursuit of Justice for the tragic death of Shukri’s death.

From the start of the case, within 10 hours of her death, they were told by the police that it was nothing more than an accident, with no weight being given to their concerns.  Simultaneously the family was bombarded by rumours and speculation of what had happened, adding to their grief and anxiety.

This meant that the first step of Justice, in this case, was to establish the truth of what had actually happened.  The truth of the circumstances of her death as well as the truth of the depth and breadth of the police investigation.

These truths were finally laid to bare via the inquiry process of the Inquest, findings were made that Shukri could not swim, that she was taken to a deep part of a river with this knowledge and left there when difficulty arose and then drowned.  In the lead up to this, it was accepted as fact that the Child involved had accosted Shukri in the school locker room to persuade her to go with her, said to her words to the effect of “get in the water or I will kill you” and laughed at her whilst she was drowning upon her return to the rocks.  Yet the Court decided that the conduct of Child 1 was not criminal.

Due to a recent Supreme Court decision, there is a question mark over whether the final prong of the gross negligence manslaughter test is even applicable as the new position is that Coroners Court should approach such cases on a civil standard, the balance of probabilities, as opposed to the Criminal standard.  On this basis, if a High Court decides that the final prong of the test no longer applies or has been incorrectly applied then it would render the current conclusion by the Court as incorrect.

With regard to the police conduct in the case, now that the Inquest has concluded all of the information that is necessary to assess an action against the police is present and requires consideration and application by the legal team.

This may have been an end of a chapter in the journey of Justice for Shukri, however, it is not the end of the book.  The family at least now know what really happened to Shukri, the facts of which have not only been confirmed in a court of law but of also out there for determination by the court of public opinion, a powerful court indeed.

Is there a threshold for investigations that police need to be satisfied on before releasing a statement (as they did in Shukri’s case)?

I don’t think so, save for the question, is there a reason to suspect a criminal offence for investigation or is there a case to answer for the purposes of a charging decision?

About the details of the police failures, in this case, we are holding off from seeking this out in public until we have formulated and served our letter before action.

Iqra will have completed her LPC in October 2020 at the University of Law. Having graduated in LLB (Hons) Law from the University of Exeter, Iqra has always wanted to pursue a legal career. She was awarded Law Student of the Year in 2014 for her strong work ethic. Having had experience with both solicitors and barristers in various areas of law, Iqra developed an interest in commercial law. She has undertaken a number of work experiences at leading law firms such as Ashurst, Pinsent Masons, DLA Piper and Hogan Lovells (only to name a few). Iqra has also completed several mini pupillages across the UK and worked at Blackfriars Chambers in London during her gap year. She has opted for a career as a commercial solicitor because she is a team player and loves challenges. Iqra is also an advocate for extra-curricular activities and is involved in a number of schemes and projects. Alongside her interest to be a writer, she is a STRIVE Supernova Associate and is also a Pro Bono Worker at Exeter’s Immigration Law Clinic. In addition, Iqra is a member of a student-run debating club and enjoys debating on a weekly basis on various topics, from government bailouts to the ban on TikTok. She has been voted best speaker for the fourth time in a row. Three of Iqra’s strongest skills are communication, resilience and the willingness to take on challenges. She likes to take on tasks that she is less familiar with in order to keep learning.

Taking a civil dispute to court: What steps are involved?

Importing and exporting after Brexit? Here are the new rules that you must follow from 1 January 2021